The Evolution of Neuro Force One

(July 2, 2020 – Scottsdale, AZ) – Neuro Force One (NF1) continues to be on the cutting edge of human performance technology when it comes to training champions such as Henry Cejudo and other elite athletes. As part of the changing evolution of our company, we’re announcing the appointment of a new CEO and Head of Human Performance.

“In this fast-paced fitness-tech industry we need to have a progressive team ahead of the business to be at the forefront of health and technology,” said NF1 Founder/President Karim Amin. “The evolution of the executives in the company, in parallel to the technology and science involved, has everything to do with our success. We have aligned ourselves accordingly by appointing Jesse Kevan, CEO and Kyle Silvey, Head of Human Performance.”

“I’ve had the privilege to work with Jessie over a 10-year horizon and Jesse has consistently shown outstanding leadership skills,” said John Brots, Ciena Corp VP Global Supply Chain Operations. “Jesse possesses the ability to develop excellent strategic plans while at the same time has the unique capability to work throughout the organization to bring them to fruition. Jessie is an excellent choice for CEO and will take this company to the next level of success.”

Jesse Kevan, former EVP of Global Sales at PN Medical, spent over twenty years as an accomplished supply chain professional at Tellabs Operations, managed the design for Environment processes for all electronic products and packaging while earning a Certificate of Management, Public Speaking Certificate, and a Six Sigma Green Belt. His experience led him to a seat on the board and Midwest Director of TechAmerica where he managed a staff of over 70 people in 9 countries.

“NF1 could not be more excited to have Kyle Silvey join our team as Head of Human Performance,” said CEO Jesse Kevan. “Kyle brings a wide range of skills and expertise to the team with his experience in tactical training protocols for our armed forces to his expertise in every respective area keeping NF1 as a leader in human performance adaptation using the most efficient and effective techniques.”

“I am extremely excited to join NF1 as the Head of Human Performance,” said Kyle Silvey. “Their holistic approach to maximizing human potential is truly next level. While a lot of performance companies have become complacent in their approach, NF1 is constantly pushing the boundaries of what is possible in assessments, training, and recovery. All of this results in an individualized, integrative, data-based approach, with the outcome being the highest performing version of yourself.”

Kyle Silvey earned a Ph.D. n Motor Behavior (cognate: Human Performance) from the University of South  Carolina in 2020 and a Master of Science in Sports Science from Hofstra University in 2015. He has worked extensively 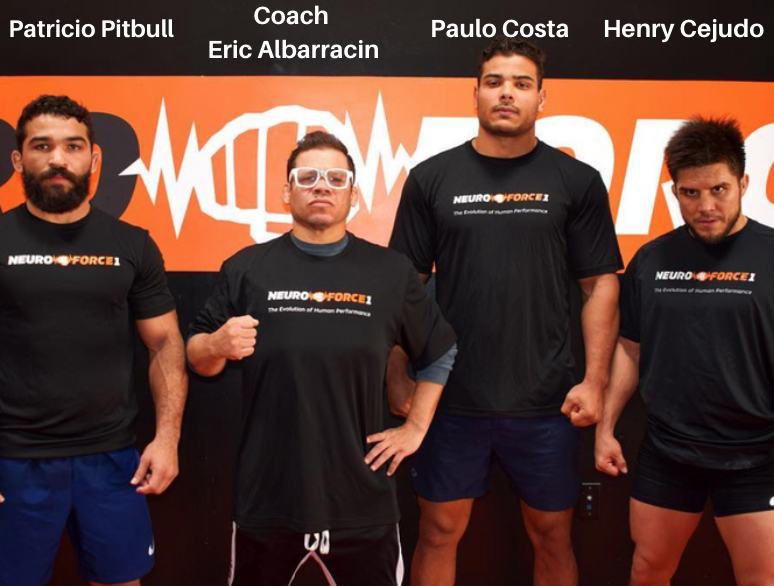 with the U.S. military and was a founding member of the research consortium at UofSC that aims to provide SOF units full-spectrum human performance testing, techniques and technology.

Our progressive thinking is why champions such as Henry Cejudo, Paulo Costa, Patricio Pitbull and other professional athletes and Olympians choose NF1.

”Every elite athlete is always looking for that edge,” said Henry Cejudo. “Neuro Force One is that edge.” Henry has both a flyweight and bantamweight belt in the UFC.

NF1 has led Henry’s last 4 championship camps, beginning with his flyweight title match against Demetroius “Mighty Mouse” Johnson, defending that title against T.J Dillashaw, then winning the bantamweight belt against Marlon Moreas and defending it against Dominick Cruz.

“They’re (NF1) revolutionizing,” said Cejudo. “I feel like I’m ahead on the curve when it comes to doing a proper camp for MMA, where I’m not extremely killing myself. I’m loving the sport through the process. It doesn’t always have to be a crazy battle.”

“That’s a big revelation for a lot of people they’re hearing that from you, like oh s–t, that’s crazy, this might literally shift the way people train,” said Joe Rogan on the Joe Rogan Experience podcast.

”NF1 is a cutting edge Human Performance Team with widespread recognition by our peers and industry experts who understand the skill sets required to effectively and efficiently make a positive impact on Human Performance at the most elite levels,” said CEO Kevan.

“We are very excited to have strong relationships with some of the most innovative technology partners who allow us to literally dial in an athlete using individualized data points with each and every athlete. We are on the verge of bringing NF1 to the palm of your hand. Stay tuned for the most epic release of our latest product which will be made available for everyone to experience the NF1 secret sauce!”

ABOUT NEURO FORCE ONE